What are you waiting for?

When we first started the Kalabox project almost (sigh) five years ago we wanted to build a stupid easy local development tool for internal usage at Kalamunaopen in new window. The basic idea was a developer should be able to easily get their Pantheonopen in new window site (Kalamuna was using Pantheon exclusively back then) running locally within 10-15 minutes so they could spend more of their time developing and less of their time wiping away the tears caused by a fickle local setup.

After using it internally with great results we realized we were being selfish so we decided to open source it. More or less right away people started messaging us with glowing reviews and before we knew it we had developed the first version of Kalaboxopen in new window, a NodeJS, macOS-only GUI frontend for Kalastack. 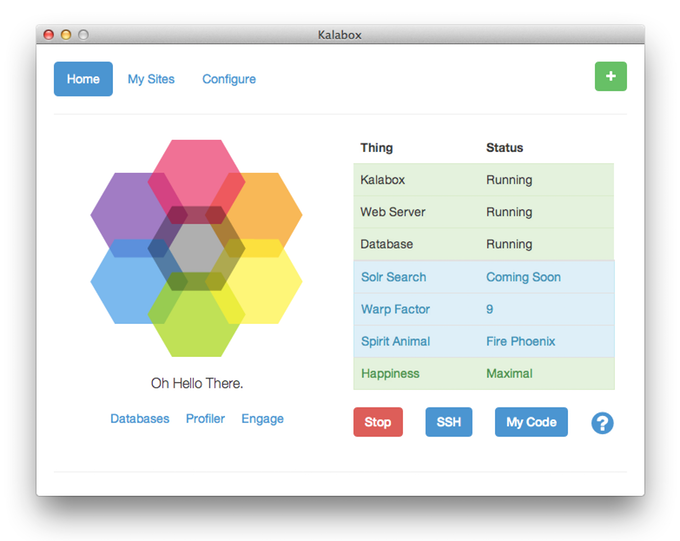 We spent the next year or so evangelizing our project; travelling around the country to various events touting its myriad of benefits and how ahead of the curve it was until two critical things changed our destiny forever...

It wasn't super hard to connect the metaphorical dots of those two points so we launched a Kickstarteropen in new window and resolved to complete the righteous work of remaking Kalabox as a cross-platform and Docker powered solution.

Making our own kind of musicopen in new window turned out to be a daunting task, an easy order of magnitude more difficult than our original Kalabox 1 project. We hired some people, fired some people, spent WAY WAY more money than we originally intended (or wanted) and left the agency we co-founded. But, after a year and a half we finally launched Kalabox 2. 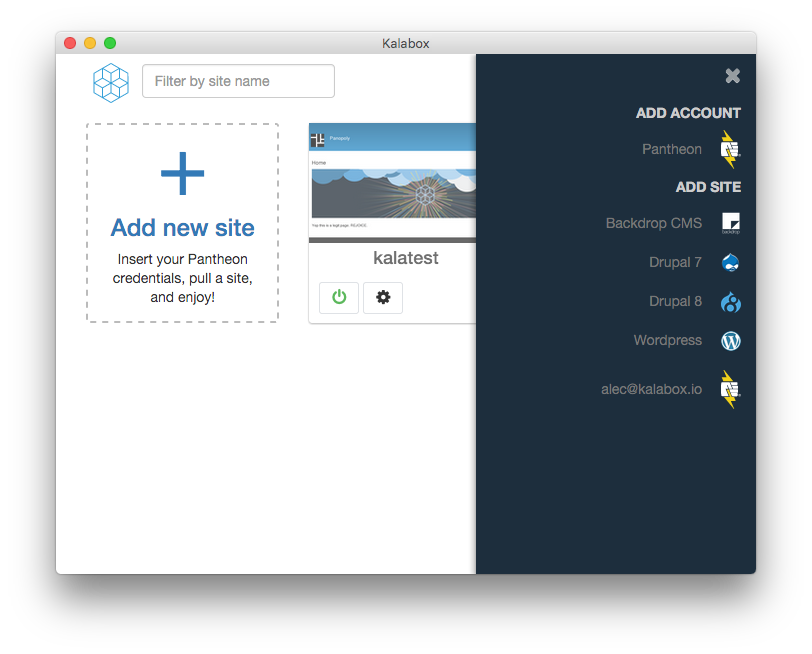 Within a few months of release it was immediately apparent that even though many people loved (and still love!) Kalabox 2 it had its own set of fundamental flaws and fell very short of our own expectations. These flaws were both a testament to its lengthy development time but also to some critical mistakes we made during that process.

So, what went wrong and what did we learn?

Looking back, it's almost embarassingly obvious to see we committed some pretty cardinal sins while building Kalabox 2. That said, when hundreds of people have pledged a significant amount of their own money to your project you want to deliver for them. This can definitely cause you to push forward in the face of fairly obvious and common development pitfalls. It also leads us directly to mistake numero uno:

Irrespective of the technology that powers such a solution, telling people you are going to build what amounts to a push-button PaaSS (yes, I mean a Platform as a Service Service) and application migration utility that they can run on their own computer, regardles of operating system and that will JUST WORK is QUITE the promise. In fact, it's such an obviously impossible promise I feel a considerable amount of shame in reading what I just wrote.

Anyway, beyond the immediate and direct difficulties of keeping such a promise its important to remember that on a local app there are monsters lurking deep within the operating system layer all the way up to the users application code aka basically everywhere. Not to mention users have an unique ability for doing all sorts of unpredictable (read: very, very naughty) things to their machines, greatly increasing the variables for which you need to account.

Combining this meta challenge with the very practical reality that Kalabox was to be built on new, unstable and fast moving dependencies and you've got...

# 2. A house divided against itself cannot stand!

To say that Docker has changed a lot since we started building Kalabox 2 would be... uh... an understatement. Consider the following table of core Kalabox components:

You'll immediately notice a pretty obvious trend: we ended up swapping out all the core components... SOMETIMES TWICE!!!. Yeah, not a good sign.

Beyond the large amount of time needed to keep up with all the changes and improvements you can imagine the technical debt that was accumulating each time we replaced a core component with something new and better.

While it might sound like a nice idea to build your software with enough abstraction layers and interfaces so that it can handle all the possible things that could happen down the road it's often way, way better to build the simplest version of what your project needs right now. This way you can get it to market and then determine whether additional complexity is warranted. SPOILER ALERT: Probably not.

So armed with the lessons of Kalabox 2 what did we do?

While this change did provide some much needed improvements it wasn't enough to stop the slide into depression. So we cut our lastopen in new window release on November 25, 2016 and then sat back to gather more feedback and consider our next steps.

About a month and a half later we had reached acceptance. Big changes were needed to Kalabox. Lando was born on January 9, 2017open in new window aiming to:

While we've only just begunopen in new window to market Lando the results are starting to speak for themselves...

We had three major goals when we pivoted to Lando:

Let's consider some data for each. 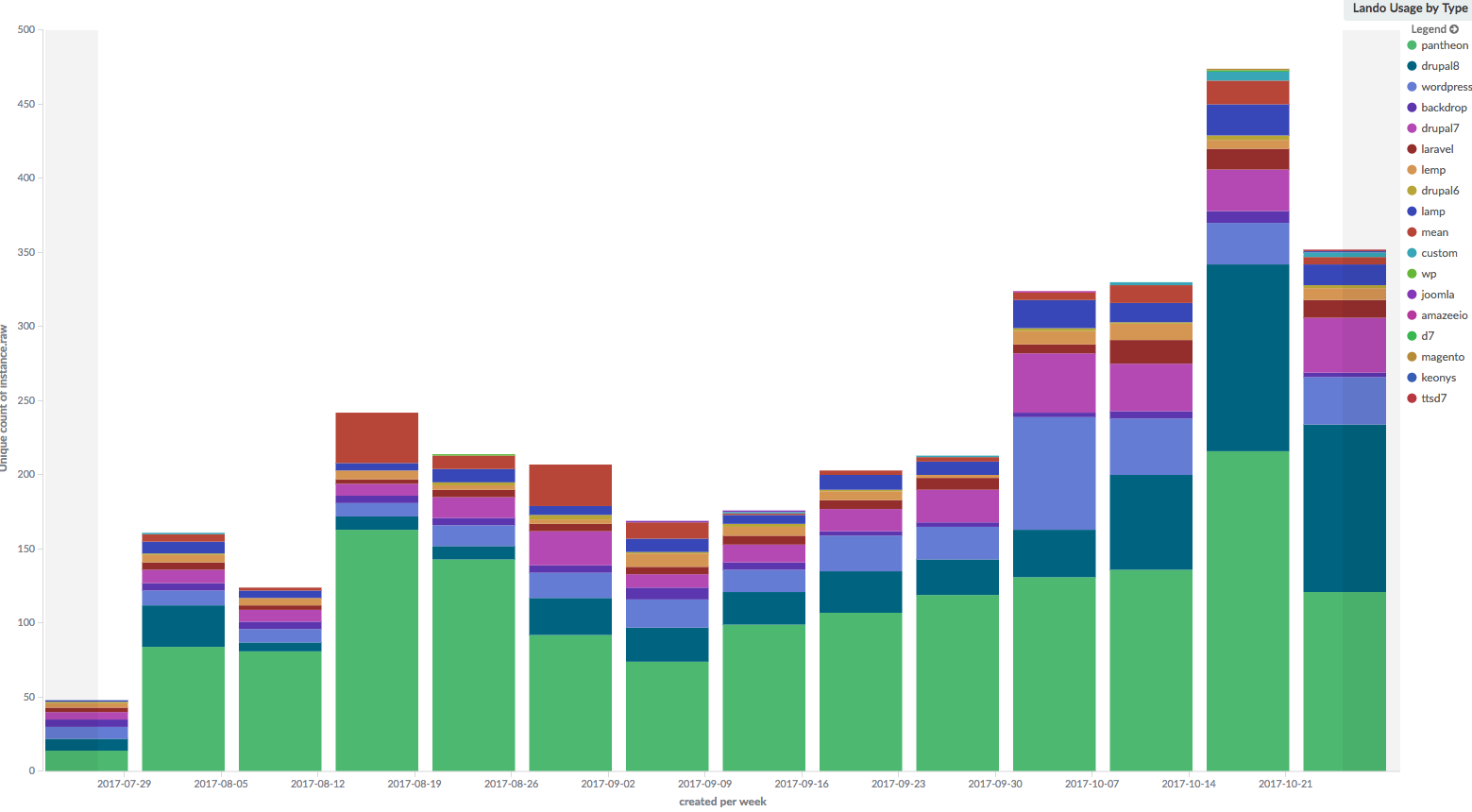 95% of Kalabox users used it specifically for it's Pantheon integration. On Lando that percentage is closer to 33%. Additionally, we've got users using Lando for Laravel, MEAN and Ruby development among others. We're also THE ONLY recommended solutionopen in new window for Platform.sh users. 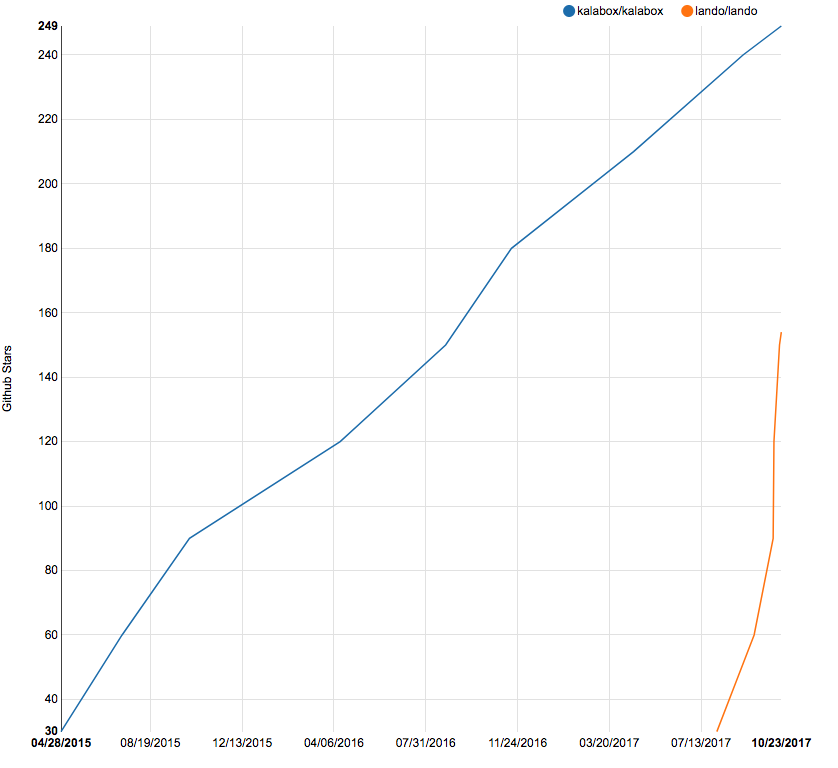 While the growth of your project's GitHub stars is not necessarily a reflection of adoption it's taken Lando 3 months to reach it's current star count. It took Kalabox 2 years. We did a considerable amount of marketing for Kalabox. We've done almost none for Lando. 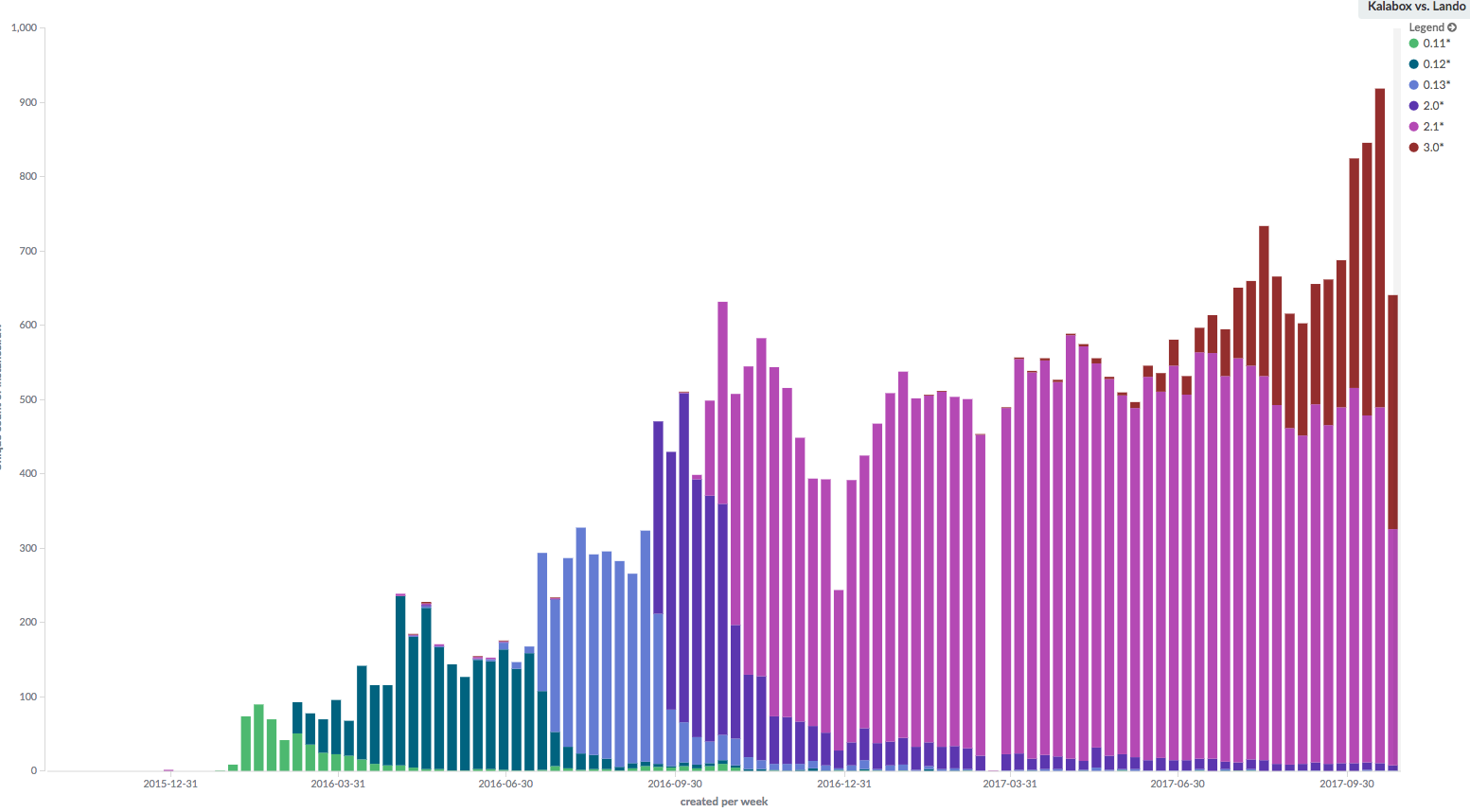 At the time of writing Lando user totals were poised to exceed those of Kalabox. This is also a good indication of adoption. More importantly, you can see significant ups and downs for Kalabox versions, indicating users coming and going. Lando has hit all time highs for three weeks in a row, a feat never accomplished by Kalabox.

All of this is to say: it's been a long roadopen in new window getting from there to here. But we had faith of the heart; now vindicated in the best and fatest local dev and DevOps tool in the galaxy: Landoopen in new window.